Briareos Hecatonchires (ブリアレオス・ヘカトンケイレス, transliterated as Buriareosu Hekatonkeiresu) is one of the two protagonists of the Appleseed franchise, the other being Deunan Knute. Briareos is a trained ES.W.A.T. operative, his point man being Deunan, whose marksmanship and strategizing skills he is still unable to rival despite his cybernetic augmentations. They met in her father's LAPD SWAT unit before World War III broke out, later both serving in the same US Army platoon during the conflict.

He's named after Briareus, one of the Hecatonchires (hundred-armed giants) of ancient Greek mythology. Briareos used to be a human, but is now embodied as a cyborg, with only a quarter of his original biological body intact. He is forty-two years old during the events of Ex Machina.

Originally an African man from the Mediterranean, Briareos was used as a terrorist by the KGB while still a child. He sought political asylum in the former USA after killing the unit's commander of operations - for which he was put on the international "most wanted" list as an assassin. After meeting an agent from Special Security Forces, he began operating as a partner with the man's daughter, Deunan Knute. Caught in an explosion, the 31 year old survived only by undergoing a full cyborg body replacement - and has been making modifications ever since.

Contrary to popular belief, "Hecatonchires" is not really Briareos' last name, but rather the class of the machine body he's contained in. His original surname isn't known.

Three quarters machine, Briareos still maintains a cardiovascular and digestive system (revealed to us in Ex Machina), but appears to have lost his reproductive system, (revealed in Appleseed (2004), though he is physically affectionate with Deunan in the manga). He stills eats and drinks (frequently in the original manga), and has the ability to get inebriated to some extent. Having somehow escaped brain damage during the wartime injuries that forced him to be rebuilt as a cyborg, he maintains all of his original human memories and his personality. His voice has changed somewhat, though the polyphonic speech synthesizer he now uses produces an accent quite similar to his former self. Tereus, his clone, maintains his original voice.

His body mixes a combination of real and artificial skin, but relies upon what appears to be relatively unchanged human blood. When shot multiple times by high powered guns in volume one of the manga, he bleeds considerabl, and has to enter a sleep mode in order to prevent damage to both his biological and artificial brains. Under his skin are multiple heat-transfer membranes, which allow him to sweat like a human.

Ultimately human, Briareos can still die of injury, illness, and age. Although highly resilient to gunshot wounds (he boasts in volume two of the manga, "it'll take more than a nine millimeter [handgun] to stop me"), repeatedly taking rounds in the back from assault rifles nearly killed him in the first of the trilogy films. In the second, a large explosion caused him to sustain significant, almost lethal, internal damage. He's been repaired twice, but seems to believe his overall composition is weakening, leading him to reluctantly think that his clone Tereus might be better suited to be Deunan's wingman.

Briareos is a prime example of cybernetic technology in Appleseed. Although his body is almost completely artificial, he suffers little loss in humanity. His outer skin is elastic, capable of feeling sensation, and the temperature can be adjusted to the cyborg's preferences. Fans of another Shirow Masamune franchise, Ghost in the Shell, will likely recall some similarities to the construction of that series' cyborg heroine, Motoko Kusanagi, in this regard.

He has eight eyes mounted on his head, four in his face (the large sensor in the middle is actually his nose) two at the bases of his "rabbit ear" sensors, facing backward, and two at the tips, which allow him to safely look around corners. His original brain has been relocated to somewhere in his chest, and is augmented by an auxiliary biological computer in his skull, which is capable of handling information in a conceptual format rather than hard binary data.

His cybernetics controller, the Hecatonchires system, is named after the same hundred-handed giants from Greek mythology. It is capable of controlling dozens of limbs or other cyborg bodies independently from one another, with no additional strain on the user. In the manga, it is pointed out that a cyborg equipped with the Hecatonchires system is able to fully control an entire aircraft carrier on his own. This ability to process multiple limbs at once is seen in action several times in Ex Machina, when he accomplishes multiple killshots while firing up to three different weapons simultaneously, one in his own hand, the other two in the hands of the Landmate he's piloting. 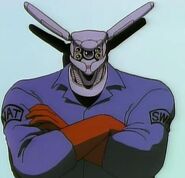 His appearance in the first anime, the OVA As he appears at the start of the Appleseed XIII series that began in 2011.

Briareos and Tereus first meeting at Hitomi's party in Appleseed:Ex Machina
Add a photo to this gallery
Retrieved from "https://appleseed.fandom.com/wiki/Briareos_Hecatonchires?oldid=5560"
Community content is available under CC-BY-SA unless otherwise noted.